Keeping fish as pets seems easy until you are asked to choose the best shape of the tank for the job.

Not just any kind of shape can sustain any type of fish.

There are 2 main shapes:

The former is the most common of the two.

So, Is It Better to Have a Horizontal or Vertical Fish Tank?

Well, that’s going to depend on a few factors, including whether your home or office is spacious enough and the type of fish you plan to keep. 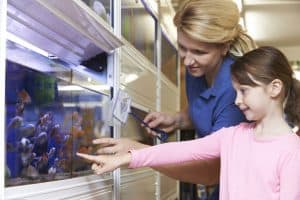 1. You Want to Keep a Large Community of Fish

If you are planning to keep a sizeable school of fish, the best type of tank for the job would be the horizontal one.

The reason is obvious – this type of tank spreads across the surface, providing more swimming length for your finned friends.

A vertical tank would be highly inappropriate because groups of fish prefer to swim horizontally, not vertically.

2. You Plan to Keep the Species That Prefer It – Loaches, Plecos, Cory Catfish, Snails, etc.

Most of these fish spend a big part of their time at the bottom of the tank which means the floor needs to be wide.

Also, water needs to be evenly distributed above them over a large cross-sectional area.

Consult widely to understand the needs of your favorite species before settling for a horizontal tank.

3. How Active Are Your Fish?

Besides the species, the behavior of your fish can influence your choice of the tank as well.

Some types of fish aren’t bottom dwellers by nature to demand a rectangular tank, but conduct themselves in a way that would require a horizontal tank.

Active fish like Barbs and Danios are always on the move, meaning you need a longer and wider aquarium.

Horizontal tanks are much easier to clean compared to their vertical counterparts.

You don’t need to climb ladders or stools to keep them sparkling clean.

So, if your back has been sick lately but you still want to keep a few Goldfish, a rectangular tank is the best option for you.

Rocks and gravel are integral to establishing optimum conditions for your fish as they provide a living space for beneficial bacteria.

These bacterial colonies are important for the removal of leftover food, fish excreta, and plant debris.

Horizontal tanks are more spacious as they run sideways, providing enough space for the addition of artificial rocks. Since vertical tanks extend upward, you will have a hard time adding anything/

While some added features like décor and accessories and even the brand can influence the cost of the tank, horizontal tanks are cheap on average compared to their tower counterparts.

If you don’t have enough space to support the expansive horizontal tank, the best alternative is a vertical tank.

Since they extend vertically rather than sideways, they are capable of holding the desired volume of water and still eat less space.

2. Your Fish Are Less Active and Would Like to Be Left Alone

Active fish prefer horizontal tanks; inactive fish would be happy to live in a vertical tank because they don’t swim much.

If you are planning to keep fish that don’t move much, choose the best vertical tank you could get.

The top part of horizontal tanks is seldom designed to support extra loads. This means you can’t use it to store some of your essentials.

Vertical tanks, on another hand, comes with spacious and free storage at the top.

This is highly advantageous for two reasons.

Aeration and filtration systems are sometimes constructed specifically for the tank, and this top space could prove useful.

4. You Plan to Keep Betta Fish

If you plan to keep Betta fish, you don’t have an option but settle on a vertical tank.

Betta fish are known to be territorial by nature.

This means they should not be placed in the same tank as other Betta fish.

They tend to get aggressive when confined in spaces with other fish of similar temperament. It doesn’t make sense to keep one or a few of these in a spacious horizontal tank.

Rather, put it in a vertical tank and let it have the entire tower all for itself.

Another thing – Betta fish seldom displays signs of loneliness when left alone in the tank unless they feel confined in a tiny space.

5. Can Be Installed in A Corner

Besides the fact that tower (vertical) saves a lot of space, they are the easiest shape to install in the corner of your home.

Therefore, if you want to make the most out of the corners in your home.

So, is it better to have a horizontal or vertical fish tank?

As shown above, that’s going to depend on an array of factors, including the amount of free space and the type of fish you plan to keep.

First, consider the temperament of your fish. Are they the aggressive and territorial type?

If yes, choose a vertical tank.

If you have plenty of space, choose horizontal tanks.

Also, if you plan to keep a community of fish, the best tank for the job would be a decently decorated horizontal unit.

Do I Need a High or Long Aquarium for Tropical Fish?

Vertical vs. Horizontal Aquarium Heaters: Which is Better?

We use cookies on our website to give you the most relevant experience by remembering your preferences and repeat visits. By clicking “Accept All”, you consent to the use of ALL the cookies. However, you may visit "Cookie Settings" to provide a controlled consent.
Cookie SettingsAccept All
Manage consent

This website uses cookies to improve your experience while you navigate through the website. Out of these, the cookies that are categorized as necessary are stored on your browser as they are essential for the working of basic functionalities of the website. We also use third-party cookies that help us analyze and understand how you use this website. These cookies will be stored in your browser only with your consent. You also have the option to opt-out of these cookies. But opting out of some of these cookies may affect your browsing experience.
Necessary Always Enabled
Necessary cookies are absolutely essential for the website to function properly. These cookies ensure basic functionalities and security features of the website, anonymously.
Functional
Functional cookies help to perform certain functionalities like sharing the content of the website on social media platforms, collect feedbacks, and other third-party features.
Performance
Performance cookies are used to understand and analyze the key performance indexes of the website which helps in delivering a better user experience for the visitors.
Analytics
Analytical cookies are used to understand how visitors interact with the website. These cookies help provide information on metrics the number of visitors, bounce rate, traffic source, etc.
Advertisement
Advertisement cookies are used to provide visitors with relevant ads and marketing campaigns. These cookies track visitors across websites and collect information to provide customized ads.
Others
Other uncategorized cookies are those that are being analyzed and have not been classified into a category as yet.
SAVE & ACCEPT
Scroll to Top